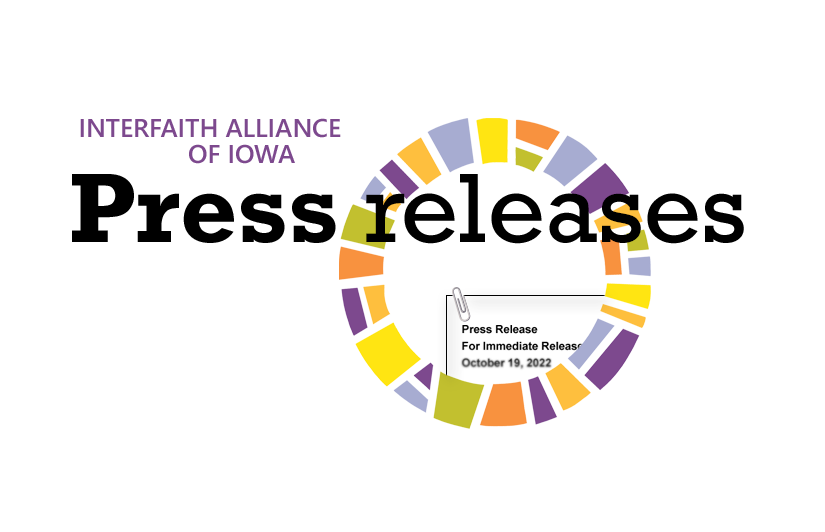 Press releases from Interfaith Alliance of Iowa and ITS coalitions

October 19, 2022
IOWANS JOIN TOGETHER IN NEW GOTV EFFORT
Des Moines, Iowa – Today the Progressive Voices United coalition launched the “What’s Possible” Get Out the Vote campaign, featuring a new video to promote voter turnout across the state. Progressive Voices United, a collaborative effort by more than a dozen non-profit Iowa-based organizations, launched the campaign to help Iowans dream of what’s possible in Iowa when we work together and when all of us vote. We know what’s possible when Iowans vote for the common good.

“Iowans have tenacity, grit, and big hearts. We care about our communities and our neighbors. When Iowans not only dream about what’s possible but also take action through their vote, we can accomplish anything. Just like sending a person to the moon. Just like electing the first person of color to our highest office. And, just like ensuring every person can marry the person they love equally under the law. Believing in what’s possible in Iowa brings us hope,” stated Connie Ryan, Executive Director of the Interfaith Alliance of Iowa.

October 18, 2022
DENOMINATIONAL LEADERS IMPLORE FOLLOWERS TO VOTE NO ON GUN AMENDMENT
Des Moines, IA – The day before early voting starts, Iowa faith leaders from eight Christian denominations are sending a joint statement to members of their local churches asking Iowans to vote no on the constitutional amendment to protect access to guns with strict scrutiny in the Iowa Constitution. Should the amendment pass, it will tip the balance of the state’s constitution heavily in favor of access to guns over public safety.

The letter to thousands of members of churches across Iowa states in part (see below for full text and list of signers): “We do not believe this amendment is in keeping with Jesus’ teachings. In all four Gospels Jesus rebukes a disciple (Peter, John’s Gospel tells us) who uses a sword to defend him when he is arrested in Gethsemane. (Mark 14.47; Luke 22.51; Matt. 26.52; John 18.11)… Again our Lord’s teaching, that it is enough, must reach the ears of those who would follow him. We echo him today. It is enough. It is enough. It is enough. The proposed amendment is dangerous and we pray it does not pass in November.”

The letter from the denominational leaders will be shared with clergy and congregational members across Iowa today and in the coming week.

An open letter from the denominational leaders across many denominational offices asking their fellow Christians to Vote No on the ballot measure, Public Measure 1, which will be considered by Iowa voters this fall.

Greetings in the name of Jesus, the Prince of Peace. We write you in the promise and teaching of his peace, that it would fill our lives and communities. We hear Jesus’ teaching of peace powerfully as our nation mourns in the wake of so many mass shootings in our country. We hear Jesus’ words to his own disciples in response to violence, in Luke’s gospel, It is enough, he says.

Jesus’ teaching on violence is why we write you directly; we are deeply troubled by the proposed gun amendment to the Iowa Constitution that passed in the Iowa General Assembly. Now, in November, we Iowans will vote on whether the amendment should be adopted. It reads:

The right of the people to keep and bear arms shall not be infringed. The sovereign state of Iowa affirms and recognizes this right to be a fundamental individual right. Any and all restrictions of this right shall be subject to strict scrutiny. (Bold emphasis added)

As leaders of our denominations and at your side as followers of Jesus, we do not believe this proposed amendment should pass; we believe it will increase violence and death, and we oppose it.

The individual right to own a firearm is given by the 2nd Amendment of the US Constitution. But this right is not limitless, nor God-given. Like other constitutional rights, such as freedom of speech, the individual right must be balanced with the right of the community to health and safety. The proposed amendment rejects balance and heavily, dangerously, favors an individual right to lethal firearms over the right to safety of the public. It does this with the specific legal phrase “strict scrutiny,” a phrase not even in the 2nd Amendment. If passed, the amendment’s “strict scrutiny” would require Iowa communities and courts to heavily favor the individual gun right over the collective right of our communities to safety. This is not just an abstract legal or intellectual issue; the lethality of firearms makes this proposed amendment a grave threat to the public.

If added to the Iowa Constitution, the amendment would significantly restrict the ability to enact even modest safety policies and will put current gun safety laws in jeopardy of being struck down. This includes reasonable laws most Iowans and most gun owners support, such as requiring background checks or allowing businesses or homeowners to prohibit guns on their premises.

Our stance on balancing the right to firearms with the health of the community is not new. Inspired by Jesus’ teaching of peace, all our denominations have called for sensible gun laws. For example, in 2018 the Roman Catholic Bishops of Iowa asked our legislators to enact gun safety legislation and repeal dangerous laws such as “Stand Your Ground.” The Episcopal Church has expressed support for legislative gun safety measures numerous times, as early as 1976 with a resolution asking Congress to enact effective handgun safety legislation. The Church of the Brethren advocates that Congress should develop legislation to restrict the availability and proliferation of guns and strengthen background checks.

We are unified in our belief that easy access to firearms and having more powerful guns available does not make our communities safer. We believe our society has become more deadly as access to guns has become easier and guns more numerous, and in this proliferation we fail to care for one another.

Examples of this failure are everywhere; the week before Easter 2022 a mass shooting in Cedar Rapids killed two Iowans and wounded ten; earlier this year the second most deadly school shooting in our nation’s history at Robb Elementary School in Uvalde, Texas seared hearts across the nation. In Iowa this year, two Iowa State University students were murdered at Cornerstone Church in Ames. There have been over 200 mass shootings in our nation this year alone. And gun violence is not just mass shootings. In Iowa 79% of suicides are by firearm.

In Iowa, firearms are the second leading cause of death to children and teens. Gun violence has been rising steadily in our state as gun safety policies have been weakened.

We do not believe this amendment is in keeping with Jesus’ teachings. In all four Gospels Jesus rebukes a disciple (Peter, John’s Gospel tells us) who uses a sword to defend him when he is arrested in Gethsemane. (Mark 14.47; Luke 22.51; Matt. 26.52; John 18.11) Some who support guns laws such as this proposed amendment say Jesus encourages weapons because in Luke 22.36 he says to the disciples, “But now, the one who has a purse must take it, and likewise a bag. And the one who has no sword must sell his cloak and buy one.” They stop there, however, not considering the conclusion to this teaching. When the disciples show Jesus two swords, they have his response to them, ”It is enough.” (Luke 22.38).

‍The proposed amendment is dangerous and we pray it does not pass in November.

Faithfully, in the name of Jesus,